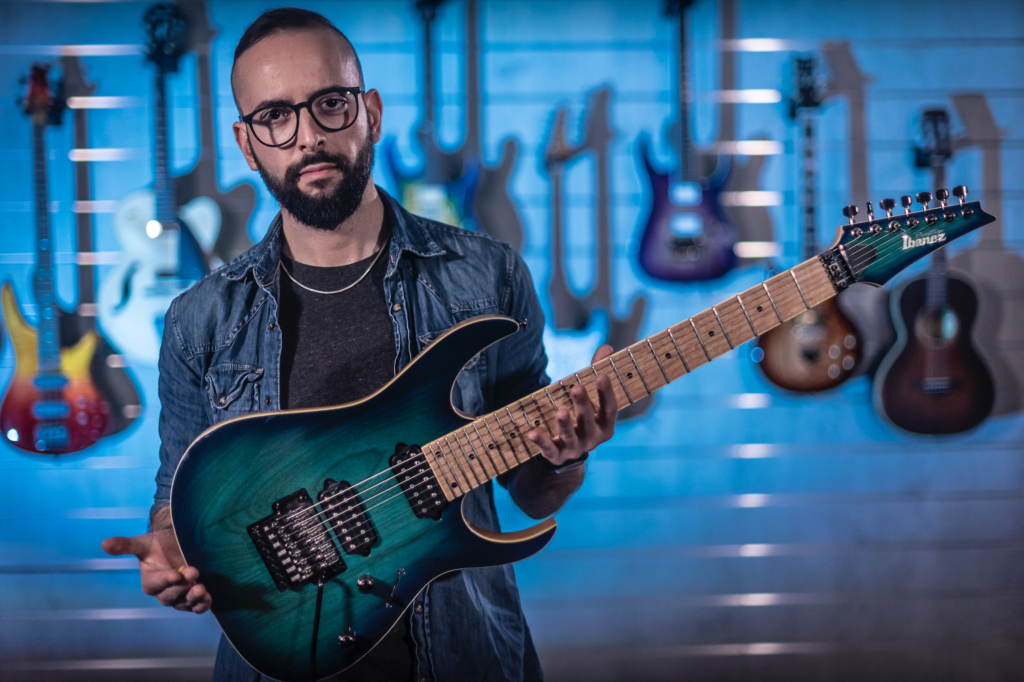 Born in Rome, Italy, in 1983, Riccardo Gioggi is a guitarist, composer, a guitar teacher and mixing engineer/producer. Riccardo is an official endorser for Ibanez guitars, Ik Multimedia, D’Addario strings and Gokko pedals.

He runs his recording studio in Rome, Riccardo Gioggi Studio, in which he works as producer/engineer and composer as well. Both the Control Room and the Recording Rooms of his studio are also used for his private guitar lessons. He is guitarist, composer and producer for his band INKFALL , an instrumental electroprog band.

His solo album A Theory of Dynamics is available in digital stores, released in late 2012 by the prestigious guitar oriented label Digital Nations - owned, led and represented by the guitar master Steve Vai.

This album was thought with the intent to offer intense, emotional and energetic music. A Theory of Dynamics also contains a special guest appearance by the astounding Michael Manring on fretless bass. The music Riccardo plays is an energetic blend of rock, metal, funk and progressive, in which his natural attitude for highly challenging guitar parts doesn’t ever compromise the composition, making up for a balanced mix of melody and technique.

Music is the one thing that matters - says Riccardo - I obviously love to play terrific, tricky guitar parts. It’s just who I am, that’s my guitarist nature. But when it comes down to composing, I just forget what I can or can’t do on guitar. My goal is just create beautiful music at the best that I can, and then playing it at high performance levels. 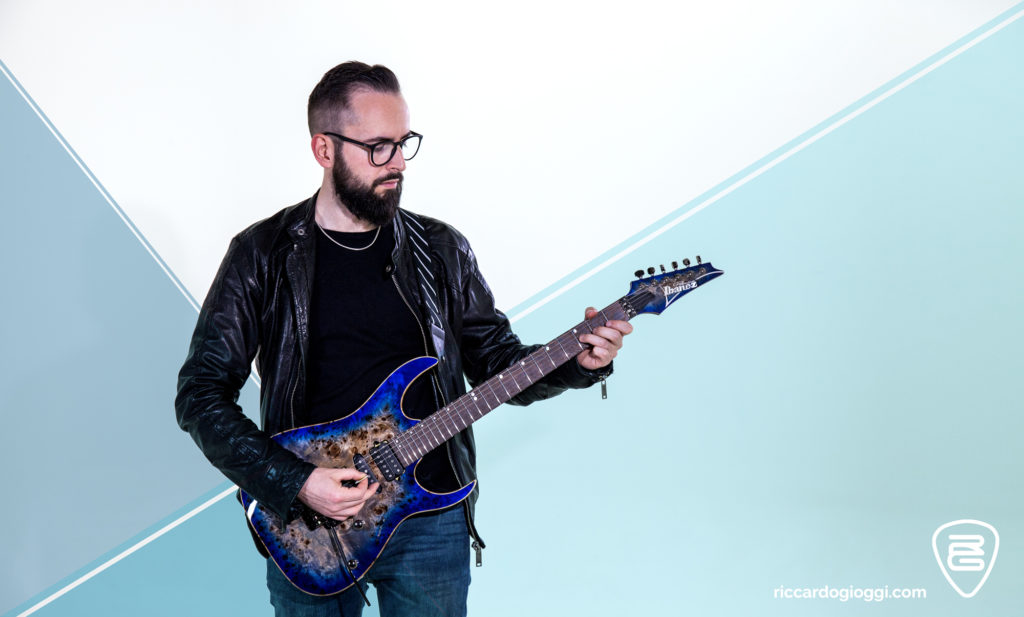 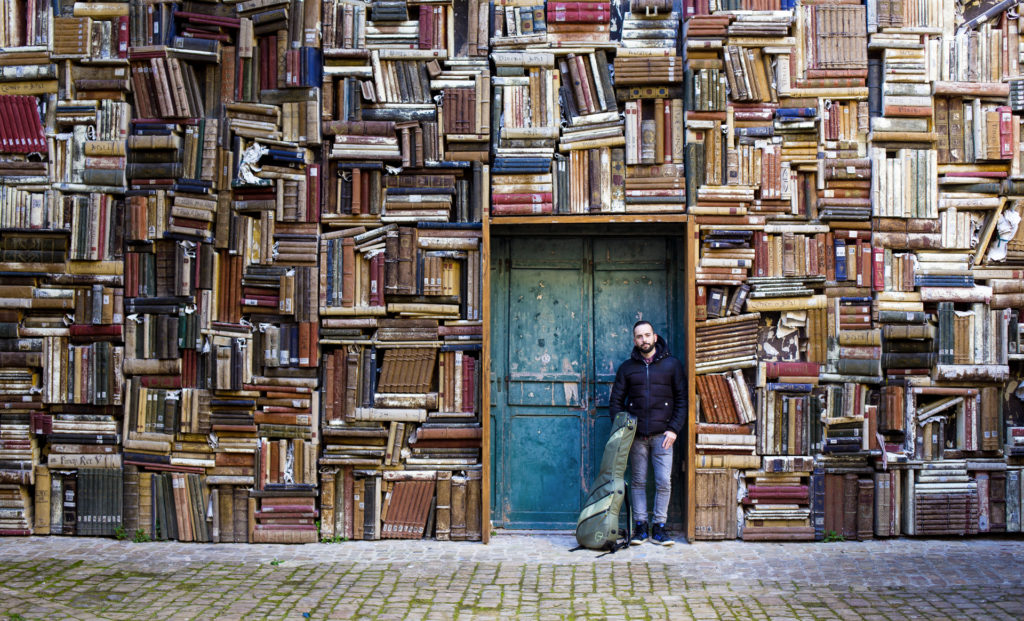 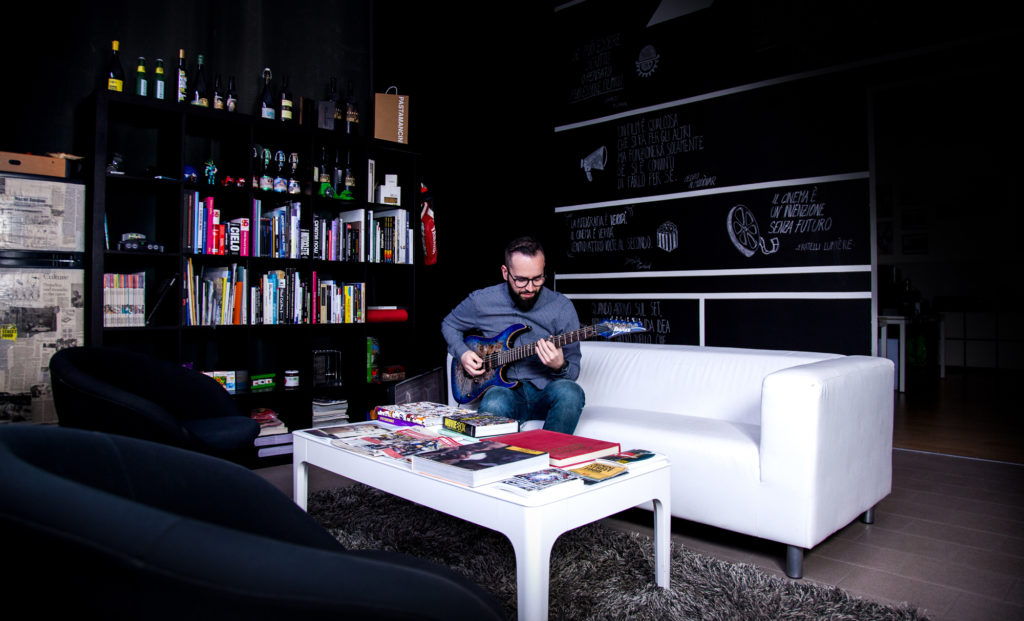 He graduated in Music Theory and Solfeggio and – despite of the music in his solo album or with his band INKFALL  – Classic Guitar, completion of the fifth year of study at the L. Refice conservatory. Graduated from the school CIAC of Rome, in Sound Engineering, Music Technology and MIDI (European Certification). Gioggi has had many experiences as guitar soloist and in many bands, moreover he composes music for ads on tv, corporate videos, and he works with RAI (first and main TV network in Italy) for the programs Sfide, L’Italia sul 2, Linea Blu, Linea Verde, Alle Falde del Kilimangiaro, and FOOD CHANNEL for the show Unforget Table.

Riccardo is a known guitar teacher in Rome and , besides his video lessons on YouTube, from 2013, he also writes as columnist on the major guitar magazine Guitar Club. His monthly section in the magazine is called "Dynamic Rock Guitar", and features guitar technique exercises and lessons as well. He currently teaches at:

He also appeared on the Italian guitar magazine Axe with a 6 pages article about muting and palm muting, on the November 2013 issue. 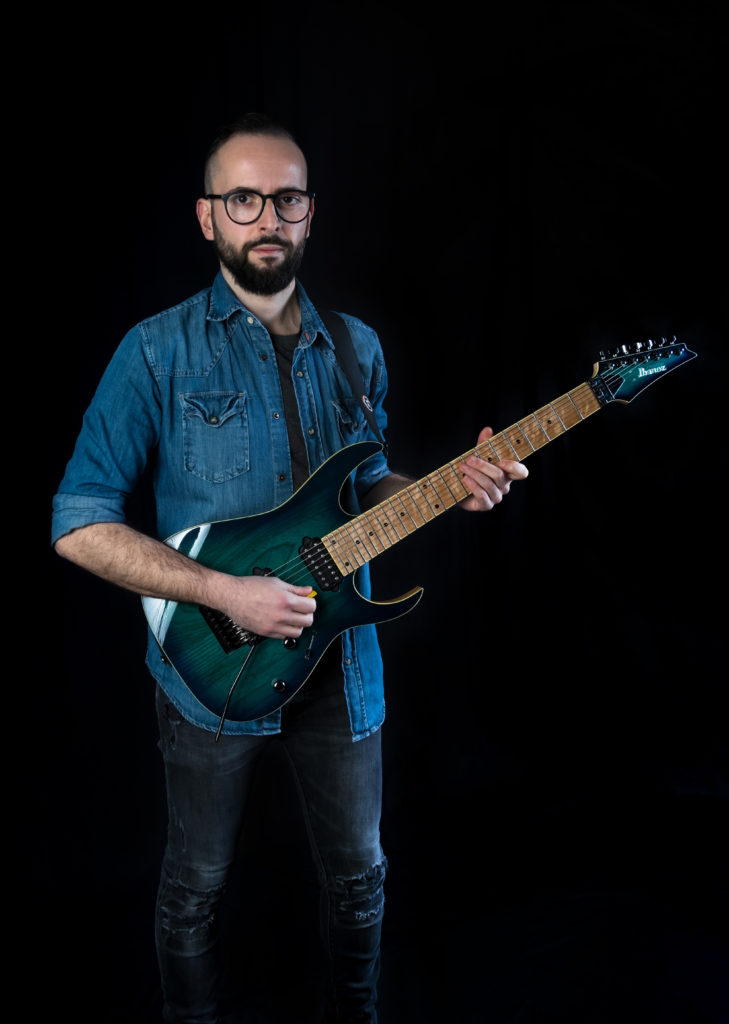 In 2019, he made a clinic tour in Italy called “Gear, Tone and Technique”, sponsored by Ibanez guitars, IK Multimedia and Zoom.

From 2017 he runs his recording studio in Rome, Riccardo Gioggi Studio, in which he works as producer/engineer and compose as well. Both the Control Room and the Recording Rooms of his studio are also used for his private guitar lessons. He is a guitarist, composer and producer for his band INKFALL , an instrumental electroprog band. Riccardo played with Michele Bravi (Universal Music artist and attendant to the Festival di Sanremo in 2016) on Rai Radio 1, for an acoustic live set during the show King Kong.

Riccardo toured in summer 2015 and 2016 with the italian singer and songwriter Nathalie (winner of the 2010 X-Factor edition, Sony Music artist and attendant to the known Festival di Sanremo in 2011 ). He plays in all of the concerts of the 2015 Nathalie “Anima di Vento Summer Tour 2015”, from June to October, all along Italy. He also works for Nathalie as arranger and musical director for the live shows. In 2015 starts collaborating with the on-line music network MusicOff for several videos: he’s been filmed in a series of “How To Play” video tutorials, which gained several thousands views on social networks.

In spring 2014 he writes and produces a brand new acoustic guitar album called “In Viaggio”, released and published by GDM Music in July. The album is a collection of music Riccardo wrote for TV documentaries on the major italian TV channels Rai 1, Rai 2 and Rai 3. The album is available on iTunes and digital stores.

In 2014 Riccardo joins the J-MAC TRIO with the US world-class drummer John Macaluso (Yngwie Malmsteen, James LaBrie, Symphony X, Ark, Lynch Mob, Jennifer Batten and many others) and the italian bass player Stefano Guercilena. In spring 2014 the J-MAC TRIO starts having concerts; the J-MAC TRIO plays a crossover between latin, metal and famous cover songs – totally re-arranged, in order to fit the musical style of the band.

In November and December 2013, he’s been touring with his own band in Italy and  Norway, playing his album A Theory Of Dynamics. The tour will comprehend concerts and guitar clinics as well. He plays concerts in Rome, Vercelli, Skienand Prosgrunn, and clinics in Pesaro and Skien. In Norway, he appears as guest at the norwegian radio network Radio Grenland: during the program he’s been interviewed and played live at the Radio Grenland studios.

Riccardo also played with Stef Burns (Alice Cooper, V. Rossi) and the 100 Guitars Frets Orchestra at Auditorium in Rome. The piece they played is called K446, written by the italian composer Michele Tadini.

Riccardo plays with the pop singer Marco Guazzone, finalist at the 2012 edition of Festival di Sanremo. With him and his band, Riccardo performs in radio promotional events (Rai – Rai Radio1) and concerts. Works as studio sound engineer with the band About Wayne (Nerdsound Records) for the shooting of the live DVD Rushism – The Live Sessions, recorded at Trilam Studios in Ceccano; he is responsible for the entire recording work.

From 2008 to 2009 he is guitar player and songwriter for the pop rock band The Electric Diorama, together they record the album Lifemale. This album is launched on 19th October in the same year for Nerdsound/Ammonia, with Edel distribution. The band shoot two videos Oh Dear Now I’m Sure, I Hate You and Our Love Will Dry Out On Christmas, these two singles are broadcast on Radio Uno and independent radio station.

After this shooting The Electric Diorama go on tour through Italy and Europe. In October 2008 the album is launched in the U.S.A. and Japan, moreover the band plays unplugged twice on the MTV Italy show Your Noize. Riccardo is contacted by Vittorio Nocenzi (Banco Del Mutuo Soccorso), and is selected for the Roma Electric Orchestra, a 53 elements electric orchestra, leaded and conducted by M° Claudio Micheli. He is the first guitar of the orchestra, with wich play a series of concerts in theaters of Italy.